From Wikipedia, the free encyclopedia

For other uses, see Feltham (disambiguation).

/ˈfɛltəm/) is a town in the London Borough of Hounslow, west London.[1] It is located about 13 miles (21 km) west south west of central London at Charing Cross and 2 miles (3.2 km) from Heathrow AirportCentral.[2] It is the location of Feltham Young Offenders' Institution,[3] situated near the town's border withAshford and the neighbouring village of East Bedfont.

Feltham formed an ancient parish in the Spelthorne hundred of Middlesex.[4] In 1831 it occupied an area of 2,620 acres (11 km2) and had a population of 924.[5] From 1894 to 1904 the Felham parish was included in theStaines Rural District.[4] In 1901 the parish had a population of 4,534[5] and in 1904 it was split from the rural district to form the Feltham Urban District.[6] In 1932 the parishes of Hanworth and East Bedfont were also transferred from the Staines district to Feltham Urban District. The Urban District of Feltham council was disbanded in 1965, along with the Middlesex County Council. It should be noted, however, that though for administrative purposes the area now falls within the area administered by the Greater London Authority, together with the London Assembly and the Mayor of London, the geographic county of Middlesex was never abolished and many Feltham residents continue to identify their home county as "Middlesex".[citation needed] The London Government Act, which enacted the changes to Middlesex (as well as parts of Hertfordshire and Essex) formed Greater London in 1965, consisting of 32 London boroughs. Feltham, together with Bedfont and Hanworth, form the "West Area" of the London Borough of Hounslow.[7]

In 1784 General William Roy set out the baseline of what would become the Ordnance Survey across Hounslow Heath, passing through Feltham.[8] General Roy is commemorated by a local pub. The MOD Defence Geographic Centre still has a base in Feltham. 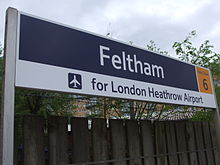 The main economic activity of the Feltham area was market gardening until well into the twentieth century. A popular variety of pea known as the "Feltham First" is so-named for being first grown in the town. The market gardens were largely replaced with light industry, gravel and aggregate extraction, and new housing from the 1930s onwards. Nevertheless, this is still one of the greenest areas in Greater London, and it includes three rivers, part of the once vast Hounslow Heath, a country park formed from converted gravel pits (Bedfont Lakes), and one of London's first airfields, London Air Park at Hanworth, which is now a large and popular public open space. Public venues include Feltham Assembly Hall, opened in 1965 in Feltham Park, community rooms in the new library, as well as several residents association halls and clubs. Since the controversial removal in 2008 of the Feltham Community Association from the Feltham People's Centre (the former Feltham Hotel), the town has lacked a dedicated community centre.

Feltham Community College (originally known as Feltham Comprehensive School when it was formed from two secondary modern and one grammar school) and Rivers Academy, West London (known as Longford School/Longford Community School from its foundation in 1935 to 31st July 2011) both have excellent sports facilities. These supplement the Hanworth Air Park Leisure Centre and Library, operated by Fusion Leisure on behalf of Hounslow Council. Leisure West (a privately-developed and managed complex of entertainment and dining facilities including a multiplex cinema, tenpin bowling alley, bingo club and restaurants) opened on the former industrial sites around Browell's Lane in the mid-1990s.

Feltham has been associated with land and air transport for more than a century. In what is now the Leisure West complex, the Feltham tramcar was once manufactured and ran along the tracks of many municipal operators, though never in Feltham itself. In the same area of the town, aircraft manufacture was an important industry, particularly during the war years. Feltham was also home to Britain's second largest railway marshalling yard, and was a target for German air force bombs several times during World War II.

Famous former resident Freddie Mercury (born Farokh Bulsara in Zanzibar, 1946-1991) of rock band Queen was commemorated by a permanent, Hollywood-style granite star in Feltham's town-centre piazza, unveiled on 24 November 2009 (the eighteenth anniversary of Mercury's death) by Queen guitarist Brian May, alongside Freddie's mother, Jer Bulsara, and his sister. In 2011, owing to neglect and "weather damage", Hounslow Council removed the memorial, promising to substitute a smaller one elsewhere.

The town forms part of Feltham and Heston Parliament constituency and the South West London Assembly constituency.[9] There are two local government wards falling entirely within Feltham - Feltham North and Feltham West - though locals often consider sections of the Hanworth Park and Bedfont wards as forming part of Feltham.[10]

The area was represented in Parliament from 1992-2011 by Alan Keen, MP (Labour). After his death Labour won the by-election with Seema Malhotra.[11]

Feltham's crime rate has increased through the past 10 years because of a high rate of robberies and assaults. Also youth gang crime is common and many crimes have been commited such as drugs and gun crime. Well known gangs from feltham are known as 'black gang' from peckham as well as 'A.F.R' from Hounslow.

The town is a focus for redevelopment within Hounslow.[1] The Centre, Feltham (also known as "The Longford Centre", if only by the original developers and some retail tenants) , opened in 2006. It is a mixed use development of a hotel, 800 homes, 50 shops, a library and medical centre. The "anchor" store in The Centre is an Asda hypermarket, though there is also a smaller Tesco superstore further along the High Street which does not form part of The Centre.[1]

Menzies Aviation has its head office in Feltham.[12][13]

On 24 June 1868 Father Ignatius founded an Anglican Benedictine convent in the parish. Feltham Priory, or Feltham Nunnery, was dedicated to Saints Mary andScholastica (twin sister of St Benedict).[14] It lasted five years before the nuns initiated a series of moves which would see them relocate to Curzon Park Abbey in Chester in 1988.

Nearby Hatton Cross tube station, which is on the Heathrow branch of the Piccadilly line, serves Feltham, with bus routes 90, 285, 490, H26 and H25 running frequent servies through the town to the station.

The town is also served by Feltham railway station, with rail service to Waterloo, Windsor and Eton Riverside and Reading, and London Buses services toKingston upon Thames, Richmond, Hounslow, Brentford, Heathrow and Staines.[15]